A beautiful burger that doesn’t quite live up to appearances

I was in Boston for work and my brother happened to be in town to launch the phenomenal Jagged Little Pill musical at the American Repertory Theater. So, we met beforehand and shared a burger and a lobster roll at this popular eatery in the centre of the Harvard campus.

Arvind had the lobster roll; I took on the menu’s sole burger, served with skin on hand cut fries; gratifyingly I was given the option of having it cooked medium, which I took. We shared a cold-cuts and cheese platter to begin with, and a deconstructed Boston cream pie for pudding. Seeing as it was my first trip to Boston, and I was being a tourist, I also had a Sam Adams.

As you can see from the photo, the presentation of this burger is glorious; it’s a perfect stack, a glorious melt on the cheese, fresh, bright salad in call caught between a perfect, lightly seeded roll – I think a non-enriched potato roll rather than a brioche. 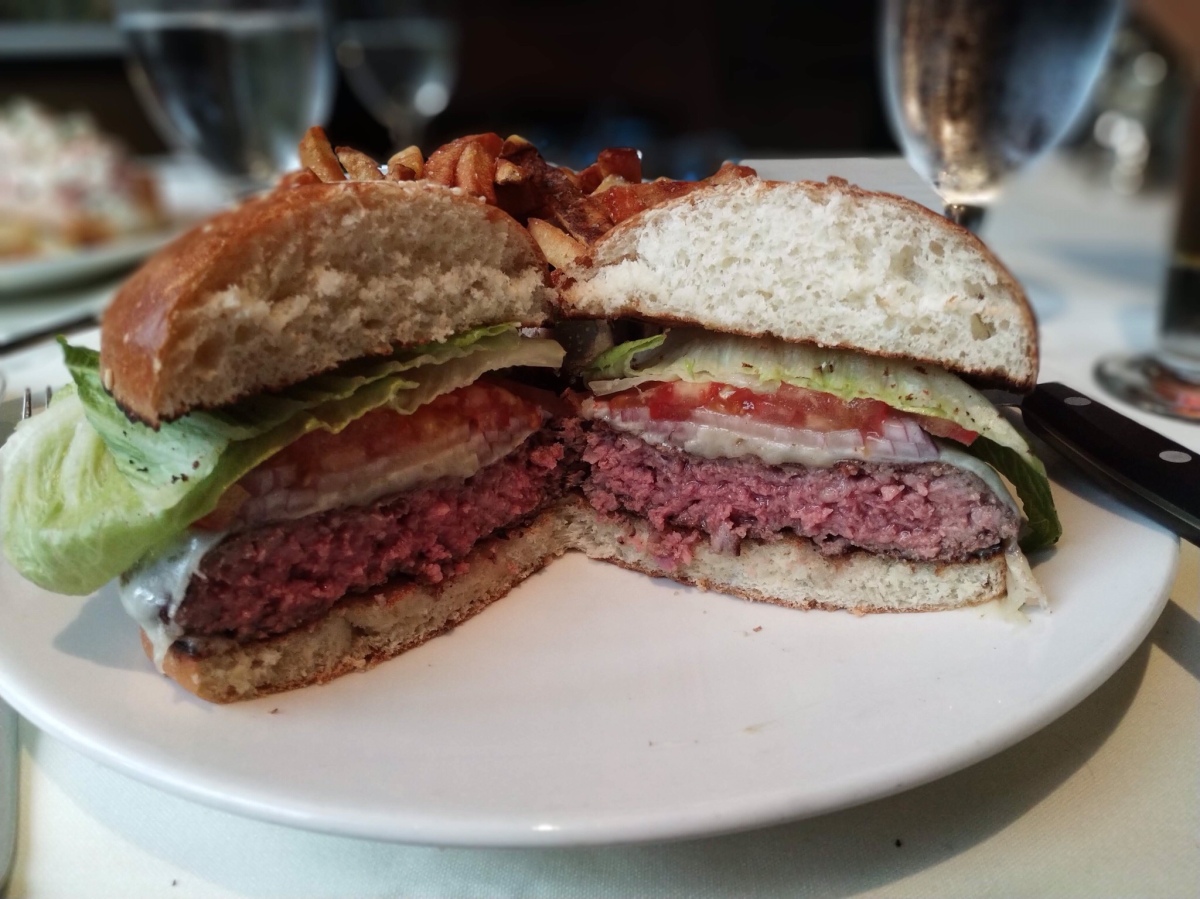 The cross section promises even more; the meat’s a perfect pink the whole way through, no graying at the edges and what looks like a decent char on the meat. The grind is coarse and its juicy without soaking the bun. So far, so brilliant. Pickle on the side, tomato, onion and lettuce leaves piled on top of the cheese.

And then the taste; this is where it lets itself down a bit. It’s every bit as juicy as it looks, but the char isn’t quite there so the whole impact is a little soft; in essence, not the best mouthfeel. This could have been addressed with some crispy bacon, or a slightly hotter griddle and a little more seasoning. The meat was good but with this finish they should probably mix up their meat blend – it tasted a little bland; wonder if they overdid the chuck and could have done with some rump in there. But I’m a meat blend amateur here, so could easily be wrong. The salad was as fresh and crisp as it looked; the cheese was a little gungey and bland, and the roll, whilst sturdy, did little to balance out the burger. A brioche might actually have helped with sweet/savoury contrast, as might some burger relish (ketchup is a necessary condiment here). Net impact: it’s tasty but not interesting, sadly. Which is a real shame as so many elements were done really well.

The fries – were slightly limp. They would have benefited from a second, or third, fry. That said, these are high grade potatoes, the seasoning was great, and they tasted good. The portion was the size of my head so they remained largely unfinished.

The cold cuts and cheese were delicious – sorry I didn’t grab a pic. We had a triple-cream soft cheese, like a soft extra salty brie, served with small whole meal toast triangles, prosciutto di parma, cornichons and a sort of beetroot puree. $12 well spent between us. 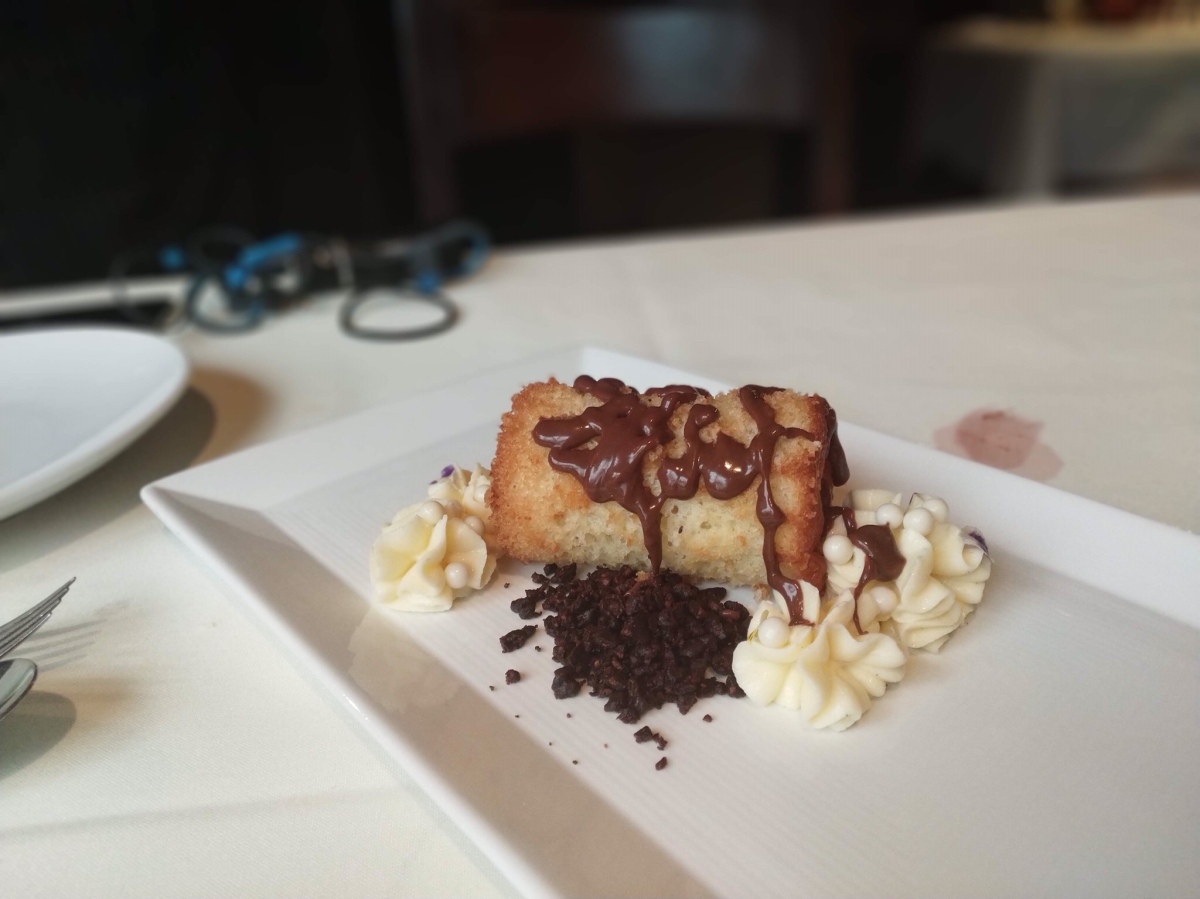 The Boston Cream pie was really nice, but I have no frame of reference. I understand it’s normally a traditional sponge with cream and chocolate sauce; this deconstructed variant makes me really want to have the original; soft, airy sponge, thick sweet butter frosting/icing, crunchy chocolate pieces and sweet chocolate sauce – what’s not to like?

Sam Adams – is a solid American lager, and tastes exactly the same as it does when you get it on import in the UK. I, worryingly, seem to be acquiring a taste for interesting lagers these days.

I traded a bit of burger with Arvind for a bit of his lobster roll – I’m not a huge lobster roll fan, as find the flavour of the lobster to be too rich for my liking. But you could tell this was special; the bread is a heavily buttered and crisp brioche, kind of like a luxury grilled cheese texture; the lobster was fresh and utterly free of the fishy flakiness you get when you’re not in the lobster roll capital of the world. There was, if anything, too much lobster for the roll!

Value – ??/5 – A friend picked up the tab but the pricing looked reasonable, even allowing for the ludicrous 20% service that’s more or less standard in the US. $16 for the burger and fries.

Burger rating – 3.5/5 – It’s good, but not great. I think if I asked for it medium well and with bacon, it’d probably jump up quite a bit – and perhaps even more if I switched the cheese. So try that if you go!

It’s just off Brattle, a five minute walk from the Harvard metro station, near the American Repertory theater. If you’re in the area, I would definitely recommend it — good food, a lovely buzz (though it was graduation week so everything was busy!) and all the food looked great. Portions are big – bring your appetite. Website here for more info.

You’ve doubtless noticed that London, and increasingly the UK in general, has undergone something of a renaissance when it comes to burger fayre. No longer are we satisfied with an overcooked hockey puck of beef, wedged into a floury bap and presented with a bottle of squeezy ketchup by way of condiments. That doesn’t mean we’re all pretentious gits who should order something else (well, maybe it does, but nonetheless); please consider the following attributes of a good burger, easily managed in virtually any kitchen, which will turn your ‘burger’ option from a tedious, seldom-ordered staple to a featured attraction.

After eating burgers at well-thought of pubs and hotels in the area out of curiosity (given I write this blog), I’ve been nothing but disappointed, so felt the need to offer some genuinely well-intentioned advice for chefs to consider. One of these disappointing venues, incidentally, is a five star luxury country hotel and the other is a local pub that boasts a chef who worked at a Michelin-starred restaurant in its kitchen, so these aren’t amateurs. Which makes their burger offers all the more mystifying in their mediocrity.

See what you make of the following:

I think that’s most things, but if I’ve missed anything, I’m hoping the burger community will help me out in the comments, and I’ll update this post (with attributions). It seems like a lot but… it’s not really! Change your burger supplier and your baker (or at least, your order from the same!) and brief your chef and you’re away.

In a year with Brexit, Trump, terrorist attacks and celebrity deaths, the last thing anyone needs is a mediocre burger to top it all off.