Fine crust, amazing meat, disciplined construction – one of the best burgers in London

Disclaimer: I was invited to a meat grinding ‘masterclass’ as a blogger. My food and drink for the evening was comped.

Pas Loucaides strikes you as an obsessive. In a good way; the passion with which the man has pursued excellence in his burgers is clear in everything he has to say about them. From the choice of cuts that make up the burger blend, to the 4mm  drilled plate he uses in the meat grinder proudly displayed in a cabinet at the centre of his open, airy restaurant in the rapidly redeveloping Kings X neighbourhood, to the passion with which he speaks of C&G’s ‘home made’ ketchup.

Other details are evident in conversation; he’s friends with James George of the butchers Turner and George, who supply C&G’s meat (and Hawksmoor’s, Richard Turner’s restaurant); he makes his pickles in house, once a week; he’s bought in a ludicrously expensive, very hot griddle pan to ensure a good sear on the meat; he’s got a special method of treating the meat so that he can cook his burgers medium rare if customers so desire; he double grinds meat if it’s too lean and needs a finer texture. He even hangs the meat used in the daily grind up on display in the centre of the restaurant. For such a burger fan as me, it was truly an enjoyable experience to meet a like-minded soul (as well as some of the other bloggers and ‘influencers’ in attendance). 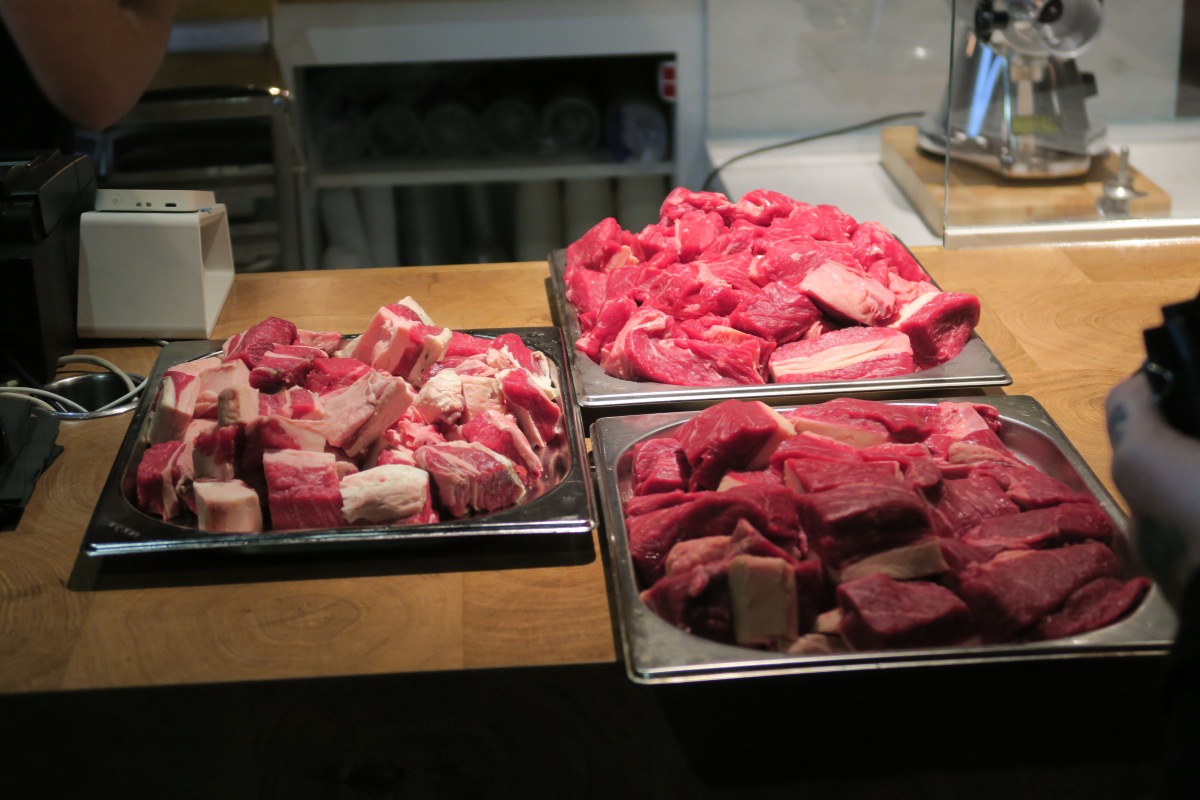 The meat cuts and blend varies each day; today it was a mix of dry-aged rib cap (fatty), chuck (substance) and rump (prime flavour). I even got to grind the chuck myself – surprisingly satisfying! We tried mini patties of each individual cut before we got to the burger, from the unctuousness of the rib cap (my fave) to the prime flavour of the rump to the beautiful textured filler of the chuck. He mixes them using an expert eye for the proportions, aiming for a 70% lean/ 30% fat ratio, prior to simple seasoning (salt and pepper) and a sear on the griddle pan. A lid over the burgers on the griddle helps melt any cheese toppings on and a temperature probe checks they hit the magic medium mark.

My friend Matt was my plus one for the influencer event, and we each ordered differently and agreed to share. Matt had the rotating special – today, a dry-aged rump burger topped with truffle mayonnaise, crispy fried shallots and that’s about it. Mine was the ‘House’ – a bacon burger with ‘bearnaise’ with added capers and pickle – basically a posh burger sauce, by Pas’ own admission – to which I somewhat unnecessarily added cheddar cheese. The burgers come on a demi-brioche bun, with a side of truffle fries, and were served medium. 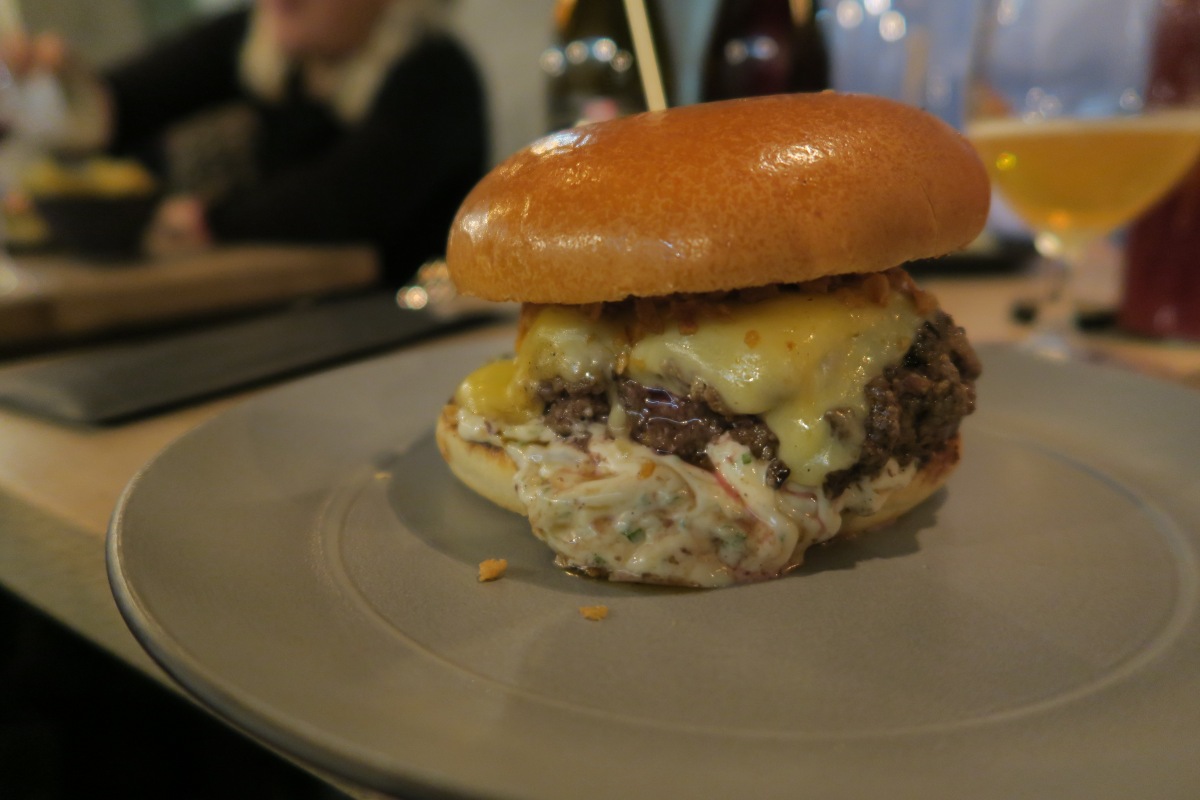 I tried the special first. The dry aged rib is rich, but without the funk you sometimes get with aged meat. It’s incredibly soft and juicy – slightly too soft, texturally, for my liking, perhaps due to the coarse ground/loose pack, perhaps due to losing structural integrity under a weight of truffle mayo. The richness of the truffle mayo is somewhat overwhelming, but if you like truffles, you’ll love it. The crispy shallots provide a delightful crunch in the messyness of this burger, a lovely bit of balance in savouriness too, against the sweet notes of the beef and the demi-brioche bun, which holds up well to the burger. A very good combination, if not to entirely to my personal tastes.

The house, though, was something else. The bearnaise-burger sauce is used more sparingly than the truffle mayo, and is under the burger so is a more subtle influence. The cheese is beautifully melted on and a blackened (but not burned), crisp, thick slice of dry-aged bacon sits atop a heavily charred patty. Fresh, sweet, crisp salad is there in the right proportions and the burger oozes flavour, whilst holding a better texture than the rump special did. The sweet tomato slice – normally something I dispose of – provided a nice sweet contrast to the extreme seasoned crust of the juicy patty, the bacon added crisp chew and the cheese a further umami glue. The burger sauce was somewhat lost – I debated moving it to the top of the burger with Pas – but the sweet, home-made pickles were in evidence. They’re an interesting contrast to normal pickles; sweeter and less crunchy, with less of the trademark vinegar tang – but interesting for that. On balance, I probably prefer a more conventional gherkin, but I’m nitpicking here…

This is a very, very special burger indeed. Pas will tell you that he prefers it ‘bare’ – no bearnaise-burger-sauce, no mayo, no cheese, – burger, pickle and salad alone. And having had it, it’s easy to see why: the beef really is the star of this show. 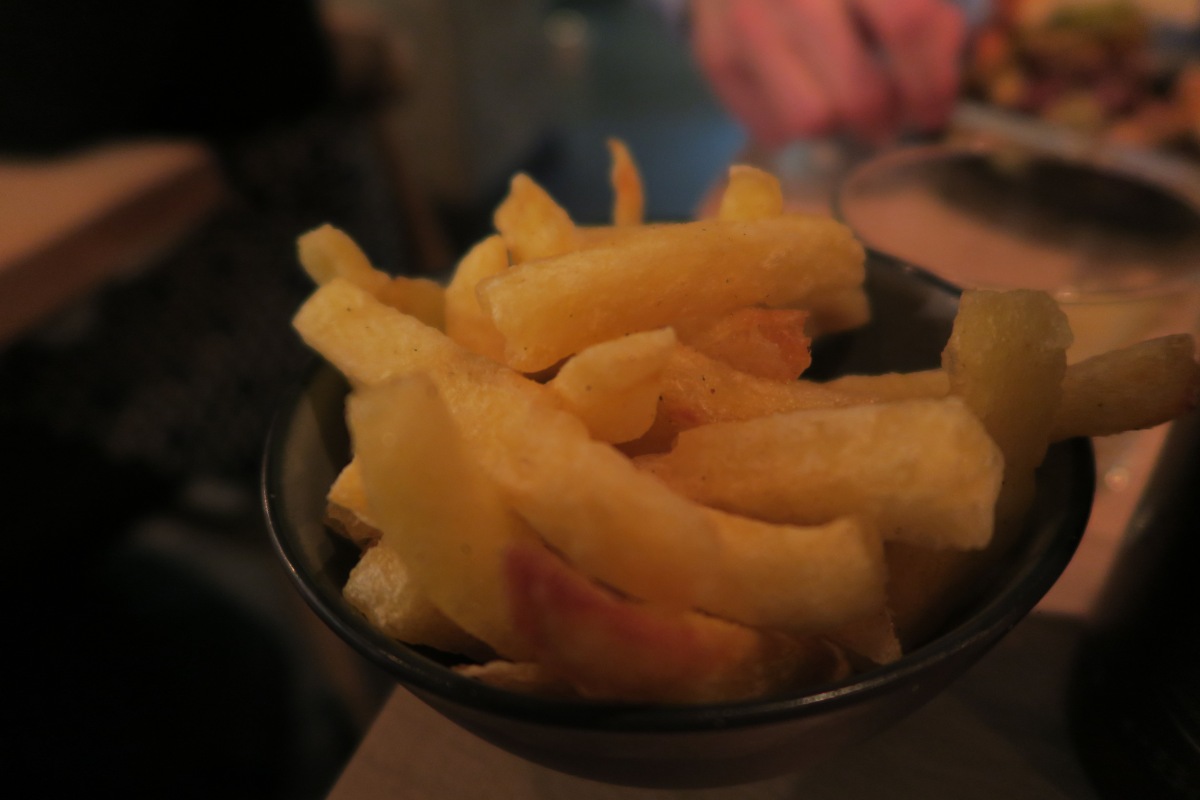 The fries? Pas tells me he drew some inspiration from the Honest Burger rosemary fries – his are thicker cut, crispier, but still cut from chosen potatoes in-store and fried to a remarkable finish. If I’m honest, I was a little wiped out by all the meat so I had just a few fries on the side. The crunch is good but they could be fluffier on the inside; the ‘truffle oil’ is indistinct next to the  truffle mayo in the special burger but that’s just as well for me. They are well seasoned and tasty.

The home-made ketchup, I hear you ask? Whilst it’s texturally perfect – less chemically oozing than a bottle of Heinz, fresh and pungent – it is a little sickly to my taste. Between the pickles and the ketchup, Pas clearly has a sweet tooth!

Pas kindly brought a couple of paired beers for us to try – I’m not a huge beer fan and the bitterness of the Belgian blonde followed by the tartness of the sour-cherry beer were not to my taste, but they did complement the burger surprisingly well – you can’t fault the man’s palate at all.

Burger rating – 5/5 – whilst there were imperfections, they are in the upper realms of subjective. Every burger lover knows that the perfect burger is unattainable; the journey is where the joy is. Well, a journey to Cut & Grind will bring you much joy. And it is easily one of the best journeys you can make in London.

About 10 minutes’ walk from King’s Cross, this place is a destination filled with delight. Go, eat, drink and be merry. And Tell Pas I said hi.

You’ve doubtless noticed that London, and increasingly the UK in general, has undergone something of a renaissance when it comes to burger fayre. No longer are we satisfied with an overcooked hockey puck of beef, wedged into a floury bap and presented with a bottle of squeezy ketchup by way of condiments. That doesn’t mean we’re all pretentious gits who should order something else (well, maybe it does, but nonetheless); please consider the following attributes of a good burger, easily managed in virtually any kitchen, which will turn your ‘burger’ option from a tedious, seldom-ordered staple to a featured attraction.

After eating burgers at well-thought of pubs and hotels in the area out of curiosity (given I write this blog), I’ve been nothing but disappointed, so felt the need to offer some genuinely well-intentioned advice for chefs to consider. One of these disappointing venues, incidentally, is a five star luxury country hotel and the other is a local pub that boasts a chef who worked at a Michelin-starred restaurant in its kitchen, so these aren’t amateurs. Which makes their burger offers all the more mystifying in their mediocrity.

See what you make of the following:

I think that’s most things, but if I’ve missed anything, I’m hoping the burger community will help me out in the comments, and I’ll update this post (with attributions). It seems like a lot but… it’s not really! Change your burger supplier and your baker (or at least, your order from the same!) and brief your chef and you’re away.

In a year with Brexit, Trump, terrorist attacks and celebrity deaths, the last thing anyone needs is a mediocre burger to top it all off.