Zan Kaufman, American founder of Bleecker Street burgers, came to London in 2011 and launched Bleecker Street with a van and a mission to serve the best American style burgers on the streets of London. Having learnt everything she could from an East Village burger joint called Zaitzeff, she wanted to bring the same experience to London. As to the beef itself, and the burgers? She puts it better than I could: “There is zero compromise with our ingredients. Burgers are about the beef. We use rare-breed, pasture-fed beef from small farms in the UK. It comes to us from the geniuses at The Butchery in Bermondsey, where it is dry-aged for about forty to fifty days, giving it an intense, beefy flavour. The finishing touches: a sesame seed bun, scratch burger sauce and good old American cheese. We like to keep things simple.” Does the Bleecker Street reality live up to the promise?

The menu is simplicity itself, especially at the South Bank pop-up where the Blue-Cheese special is not available – single, double, bacon and the Bleecker Black – a black pudding slice sandwiched between two substantial burger patties. Having seen people being served singles, which looked like 4.5oz patties at most, my hunger conquered me and I went for a double – and, because I’m greedy – added bacon, alongside the skin-on fries. The South Bank pop up does a good trade in  American beer, too, if you’re into that sort of thing.

The burger doesn’t look that extraordinary there’s little to the presentation, the sesame seeded bun is toasted and looks very standard fayre… and the patties look surprisingly small. The camera adds a few ounces of flattery in the picture above. Even a double doesn’t have the heft of a P&B burger, for example. And mine, surprisingly, was cooked medium well rather than the medium rare a friends’ Bleecker Black came with. I suspect the guys struggle with consistency in the small confines of the pop-up kitchen as other friends’ doubles were also rarer than mine. The fries come in a generous sized cardboard cup and are crisp, well-seasoned and delicious dipped in the plentiful ketchup, mayo or mustard that adorns the few small tables outside the Bleecker Street Shack. 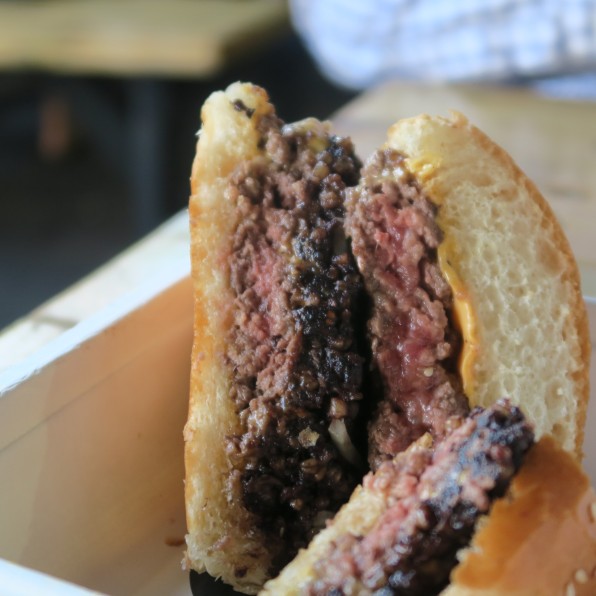 As to the burger… OMG. The aged beef delivers a gamey taste and, despite being cooked medium well, the coarse ground meat is unbelievably juicy – literally spilling onto the cardboard plate as I took my first bite. It’s really well-seasoned too; though simply – no unusual flavours, spices or herbs. The American cheese singles are completely melted in to create wonderful mouthfeel, and whilst I had initially feared that the sesame seeded bun was dry and overtoasted, in this world of soft brioche, in the end it proved necessary for it to stand up to the juicy intensity of the burger. There was some onion in there, but it didn’t really factor in the taste behind the beef. The bacon – thinly sliced, not-entirely-crispy streaky bacon – was somewhat lost in the beef-fest, which is probably why they don’t do a double bacon cheeseburger as standard. Occasionally the burger got dipped in mustard or ketchup (wow), but it was fine on its own too. I suspect a fat/lean ratio of 75/25, and the result on the taste and the texture… well, wow. I want to go back. This, Honest Burgers, and Lucky Chip are currently in top contention for my personal best burgers in London, but there’s still far to go on this burger gastronomic adventure.

Burger rating – 5/5 – very possibly the best burger in London. I want to go back for lunch.

The pop up supposedly runs until 30th September. You can find it under the Hungerford bridge, by the Royal Festival Hall on the Queen’s Walk, right by the river. A straight walk over the bridge from Embankment tube. From 11.30am to 11pm daily.