The best burger in Islington, if not the world! After all, did not Samuel Johnson say:

I have a new semi-regular Monday tradition, which takes the edge off the prospect of four more days of work: Monday night burgers. We’re currently eating our way through Islington, which seems to have an unusual density of great burger places including Five Guys, Meat Liquor and more, and we started with Lucky Chip, resident in the Old Queen’s Head pub on Essex Road.

It being a Monday, the burgers really were the focus of the evening, and we weren’t disappointed by what they had on offer. Especially not, when given the opportunity to flip a coin for a free burger, I called it and got my ‘Dirk Diggler’ monthly special for free.

Lucky Chip was started life in a food truck, by Aussie import Ben Denner, who apparently ended up living in London ‘by accident’ – which is pretty good news for us, because the fast-spreading Lucky Chip serves up some remarkably delicious food.

The burger itself – my ‘Dirk Diggler’ – is “35 day aged long-horn beef patty, braised beef short rib, American cheese, pickled coleslaw, Sriracha Kewpie mayo and spicy BBQ sauce.” Alongside it, I just had the house fries (the lucky chips, I suppose?) and a pint, there wasn’t much else needed… though given how good the burgers were – when I go back – the hot wings need to be tried. 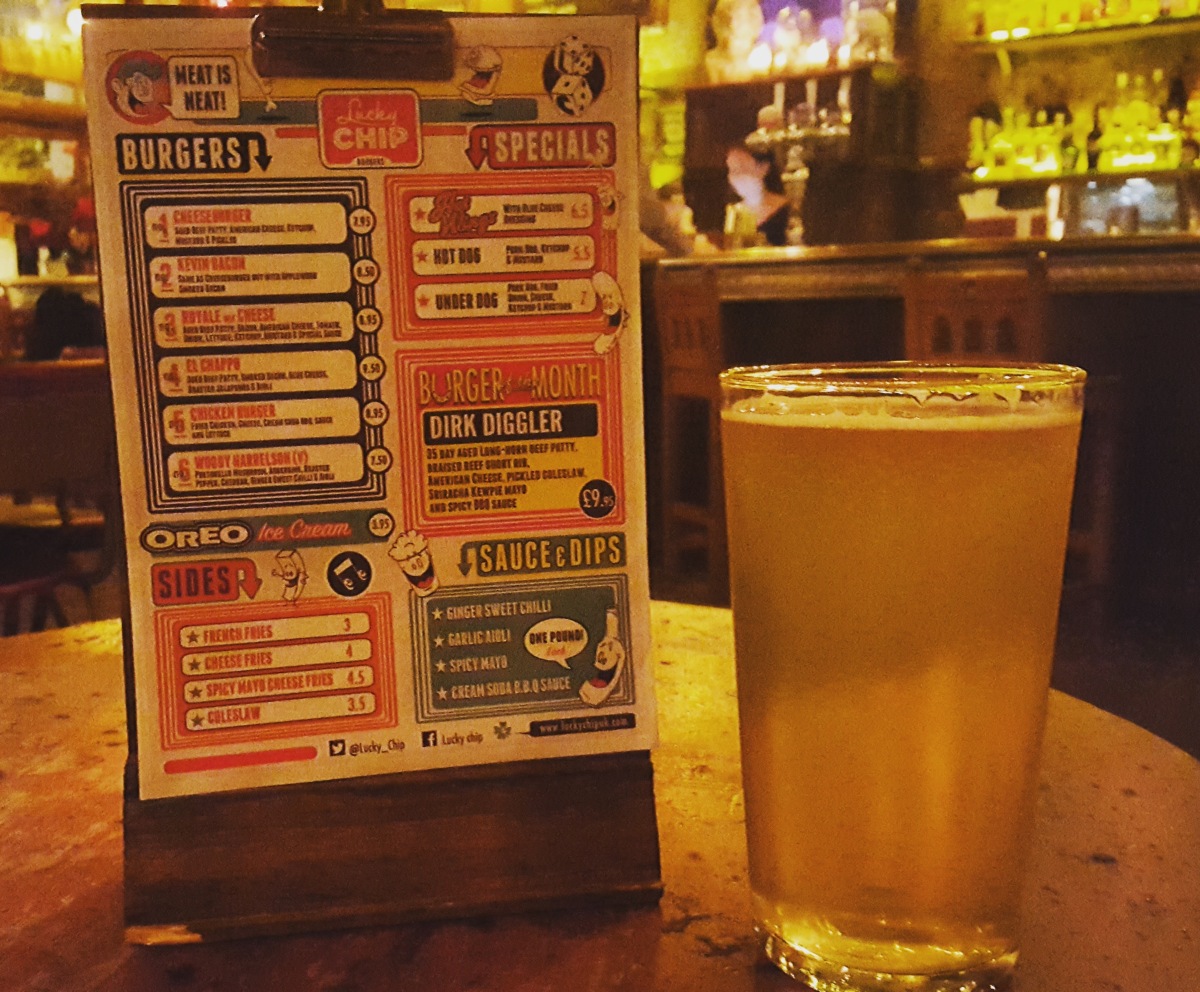 The Old Queen’s Head is one of those pubs that retains old world charm, but with none of the stifling airlessness I used to hate about “old man’s pubs” pre-smoking ban. Remarkably, it also seems to avoid the sometimes offensive pretentiousness of gastropubs. I guess it probably belongs to the extended ‘Shoreditch Chic’ set that seems to be doing the rounds these days.

The bar staff were very helpful, the coin toss for a free burger was a great gimmick (I guess effectively a BOGOF offer to pull people in early in the week? It wasn’t advertised and one of our group didn’t get offered it… haha, Matt), and the food was served quickly in baskets to the table.

The burger build was perfect – no ‘Falling Down / Can anybody tell me what’s wrong with this picture’ moment. I’d feared somewhat that the fillings would be overpowering; I’ve had (non-bacon) meat as a topping on burgers before and it often a) makes a mess and b) presents a really confusing set of flavours and textures. However, the balance is perfect; the combination of the amazingly tart pickled slaw complementing the spicy mayo and BBQ sauce, the short rib adding a chewy saltyness which complemented the (well-melted) American cheese and the perfectly cooked (to medium) burger patty, which I would guess weighed in at 6-7oz. The bun, not a brioche but a sturdy but pliant seeded roll, held up amazingly well given how juicy the burger was. The combination was a taste sensation and it is now ranks categorically as the best burger I’ve ever had. Whilst I’d feared it wouldn’t be enough food – the burger is substantial but nothing compared to some of its ‘gourmet’ counterparts – it proved both delicious and filling.

The chips were fine – a good, crisp texture to them, well seasoned and authentically rich in potato flavour. Gimmick free and tasty, there’s really not much else to say about them.

Find your local Lucky Chip now! Lucky chip is in residence at Birthdays in Stoke Newington and has its own venue in Dalston (w/ Fine Wine!) as well as the Old Queen’s Head. They Tweet here.