Our final meal on this visit to the US was a brunch with cousins from Singapore in a Eastern Mediterranean style restaurant in the most modern style of hotel you can imagine in North Brooklyn. Totally normal.

The burger had no grand billing but it was ground and cooked on site, and sounded interesting, so I thought I’d risk the eccentricity of the Mediterranean stylings and see where it landed.

There are some very interesting elements to this burger. There’s a good crust; the pickled onion looks fresh, bright and inviting, offering sharpness and sweetness in one. The bun looks soft and has a welcome light toasting. The cucumber – no. That’s not ‘shaved’ cucumber, that’s not even a ‘sliced’ cucumber. That’s a full on wedge of cucumber. Too much, picked out and eaten on its own. It was fine. You can see a small pot of toum hiding between the burger and the seasoned fries. 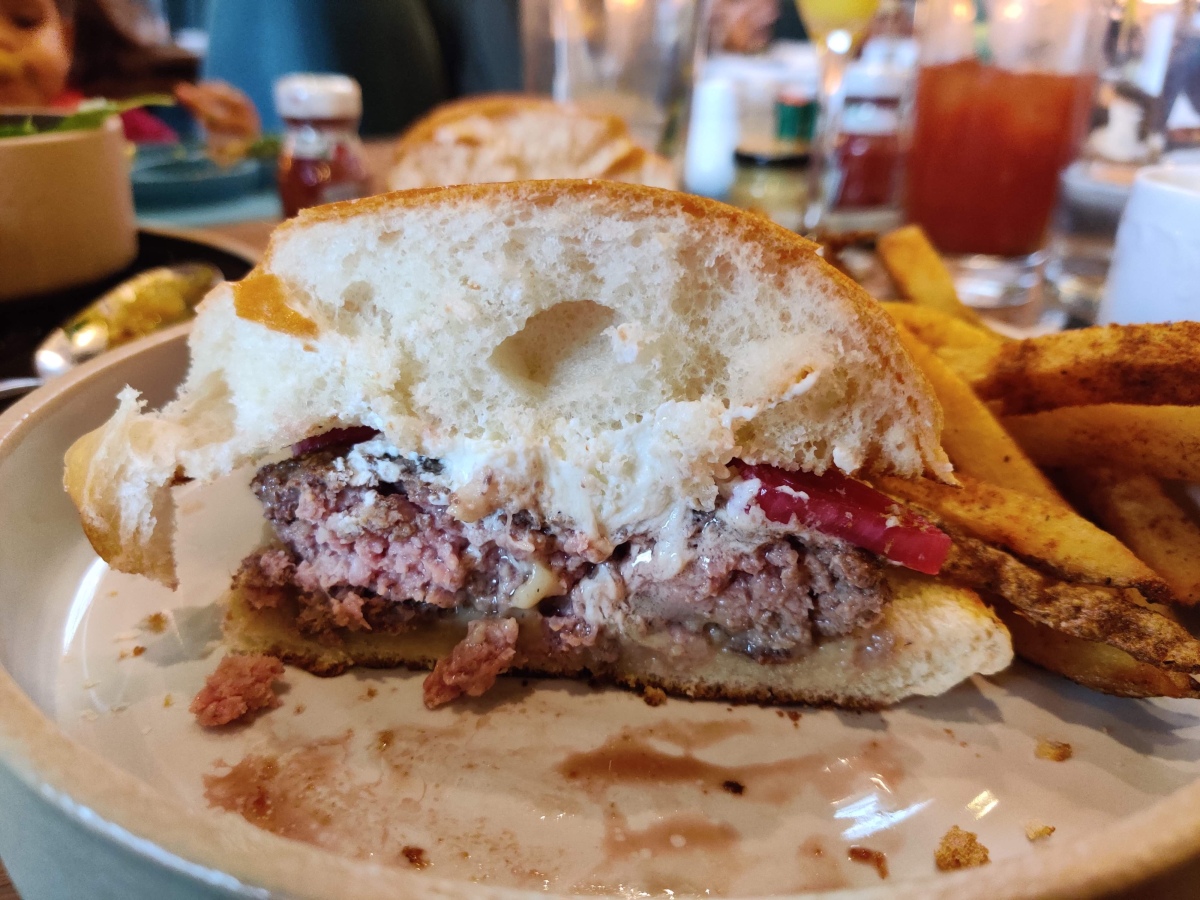 But… and it’s not an insubstantial but… the first bite unlocks very little flavour. The burger is hefty but underseasoned; the cuts of meat used were insipid – if I had to guess – I’d say it was heavy on chuck. The toppings aren’t evenly spread and it takes to bite two or three to get the feta and pickle properly involved… and they do help considerably, the savoury goo of the feta adds a much needed umami tang. But the flavour is just odd (for my palate) and the mouthfeel of the feta isn’t entirely pleasant, gumming up your mouth unexpectedly.

It’s such a shame as the burger/bun combination is in many ways glorious – good crust, melty meat, tender and juicy with every mouthful. It just doesn’t taste of very much.

As to the fries, they were lightly seasoned and (for me) slightly too lightly fried. Occasional crisp bites but some soft ones. The pot of toum was delicious, though and was better than any aioli as a dip for the fries. Perhaps I should have doused the burger in it…

The Seven Seeds Restaurant is downstairs in the Williamsburg Hotel, on Wythe Street in Brooklyn. Find it and book here. Probably don’t have the burger, though, unless you’re a huge feta fan. The other food looked more interesting and was great, by all accounts.