A juicy Gallic smashburger (smashburgé?), worth travelling for.

Ok, I’ll freely admit – I googled ‘burger restaurant’ near the hotel we were staying at for a business trip and Big Fernand jumped out. I liked the pictures so we headed down.

However, having Google translated the copy on the webpage for this review, I’m SO pleased we went as would TOTALLY travelled for this even if it hadn’t been convenient:

“In the middle of a small Parisian street, at the end of a restaurant of district embalmed with the smell of herbs and fresh bread. A band of mustachus is busy at the rhythm of the sizzling meat just chopped to revisit a dish known by all: the hamburger. Their Hamburgs caress the sweet dream of seducing the most refractory skeptics and offer a second romance to the lovers convinced of the burger. This is how Big Fernand was born: a mixture of popular culture of a dish that brings together people from all backgrounds and products gleaned throughout France.”

There’s only one right reaction to this: wow.

The burgers are cooked as ‘smash’ burgers -a healthy portion of the mince is rolled into a ball and squished down onto the grill with a heavy spatula, cooked in its own fat until crispy, scraped off the grill, flipped for a lesser version of the same treatment before being topped and stacked on the bun, then wrapped in grease-proof paper to serve. By coincidence, my favourite food blogger/scientist Kenji Lopez-Alt has just released a video on the art of a smashburger which explains this technique in a bit more detail (although Big Fernand use MUCH bigger patties and manage to carry it off). 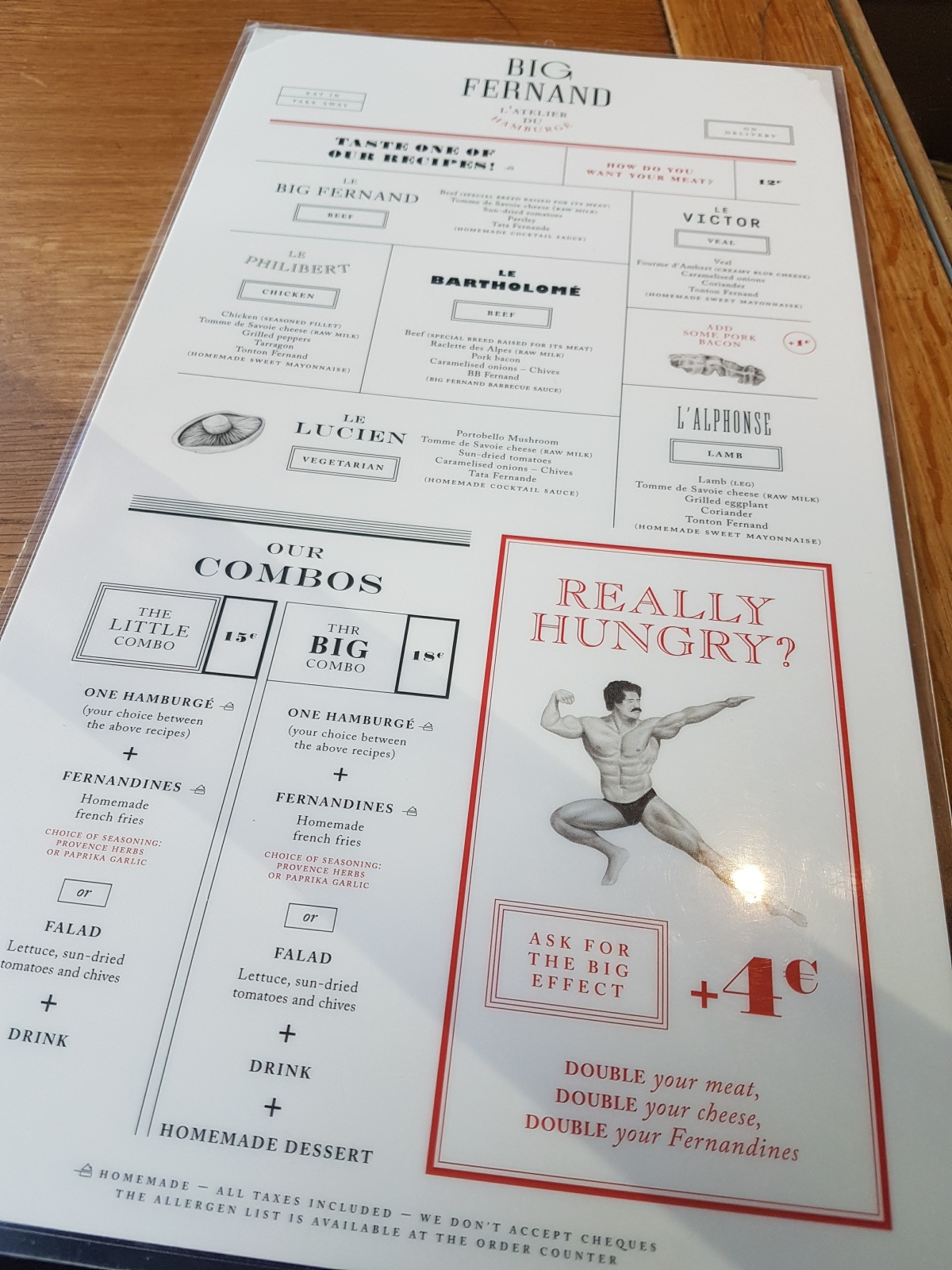 Pat and I both had the Bartholome, Beef, Swiss Raclette, bacon (lots of bacon), caramelised onions and chives, topped with Big Fernand’s own BBQ sauce. I admit, I ‘doubled up’ for €4, having only had a salad for lunch, which added a second patty, more bacon, cheese and an entire (totally unnecessary) portion of fries. Pat opted for ‘herb fries’ and I went for Paprika fries. All that for €14 (€18 for my double) – with our choice of soft drink. We were offered a choice of how we wanted the burgers cooked and both opted for medium.

Holy moley. This was a monster. The slightly floppy, very simple seeded white burger bun barely stood up to the heft of a single patty, much less my double. The raclette was copious and melty, and the bacon in plentiful supply, providing a salty chew. The BBQ sauce provided a necessary sweetness, cutting back on the incredible umami from the rest of the burger. Whilst Pat detected a hint of sweetness from the onions, they were lost in my behemoth of a burger. Not a terrible thing given the general deliciousness of the burger as a gestalt.

The meat itself was a cooked a bit over medium (unusual for France, where the colour ratings on meat are usually one down on what we order in the UK – i.e. medium is usually medium rare etc)., but the high fat ratio of the beef (essential in a smash burger) meant it was no less juicy for it, and the cheese, bacon and BBQ sauce complimented it beautifully. I think they could improve the bun – a sturdier potato roll or even a brioche bun might have stood up to the burger slightly better – but this is really a very minor concern in what was an otherwise magnificent mound of meat (and stuff). 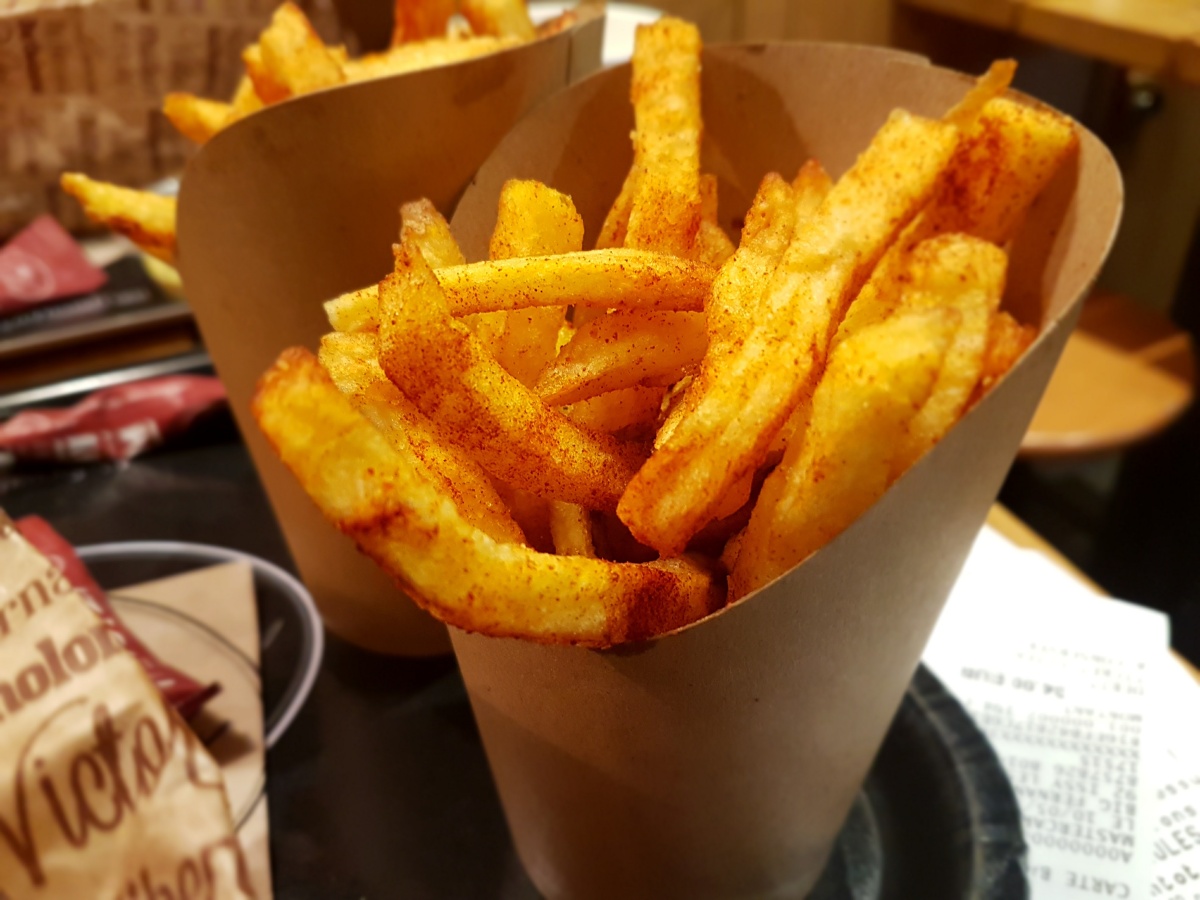 The fries… were slightly chewier than I’d expect for ‘freshly’ cooked fries (perhaps our batch wasn’t that fresh), and Pat’s herb fries were reminiscent of Honest Burger’s rosemary fries. But the seasoning was nice. They were served with a garlic aioli which was unnecessary (chips needed sweetness, not further saltiness!). Not bad as a combo at all!

Burger rating – 4.5/5 – I am totally going back the next opportunity I have to be in range. Fresh, delicious burgers, great service with amusing, interested staff happy to practice their English with us… and lots more to try.