Burger source
I auctioned off a guided burger tasting evening as a way of raising funds for Byte Night / Action for Children, a charity we support at work that does very worthwhile work with children in vulnerable circumstances. Naturally, it was bought by a vegan (and an omnivore).

So that meant we needed to find a burger place I hadn’t been to – so we could review it – and one that had vegan options. And actually, in #Veganuary, that wasn’t that hard.

Dirty Bones seeks to bring American comfort food, NYC style, to London. It’s the lovechild of two friends who liked what they saw in NYC and decided to bring it to London. Little about the origins of the burger, but we know it’s dry-aged steak and brisket… So let’s see…

In addition, Saad and I shared the cheeseburger dumplings (housemade gyoza dumplings stuffed with burger mince and melted cheese. Served with our signature burger sauce), Ed had the Padron peppers (sprinkled with Madron salt) and a Fordham Gypsy Lager.

The meat of it
You can see this is a well plated burger.

Pickles, thick cut red onions and an extremely healthy of dijonnaise provider a slippery base, and the well melted american cheese gloops over the two crispy 3-4oz patties. The glossy seeded bun looks solid, yet pliant.

In cross section, a slight pinkness shows through – the Kingly Court restaurant is small, I doubt they have the space to grind and prep their own meat on site, which means they are limited on cooking the meat truly pink. And it’s not really necessary for this style of cheeseburger, so I’m not concerned. The dijonnaise is really slathered on thick; onions slide out of the base as I cut through for the cross section pic, and half the stack threatens collapse.

The first bite – is all crisp, crunch, sweet onion, and the hot rasp of mustard cutting through the sweet mayonnaise. The bun is soft, holding up well against the sauce and the burger, and – appropriately – not enriched. No need for brioche here, the dijonnaise, pickles and onion provide the sweet counterpoint. As to the meat itself? The grind is tight and packed in hard, but it is good meat, so it’s not chewy. There’s a light crust on the patty, but a hotter griddle and more seasoning would have helped this along, even if it meant a more cooked centre. The fat ratio seems slightly too low – it’s quite a lean burger and the only drippings are dijonnaise, not beef juice. But the overall impression is not bad at all; the heat from the mustard in the dijonnaise is moreish and its ample quantity makes up for the slight dryness of the meat; the bun is perfect, the cheese makes up for some of the underseasoning. It all works, albeit messily.

I have only pictures of Ed and Saad sampling the Vegan Classic and the Spicy Chicken, but I’m told they were good. In fact, Ed had to double check it was actually vegan (having been led down the garden path before), and was provided with a list of ingredients. 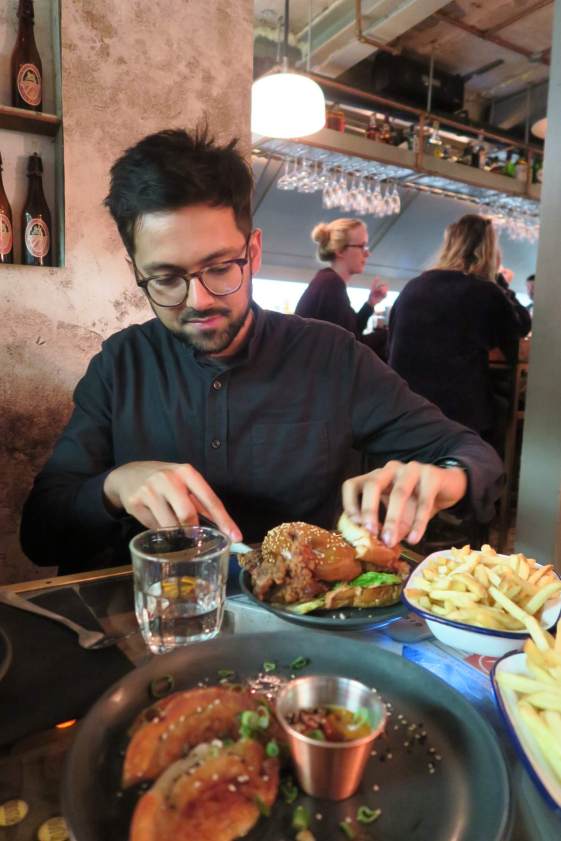 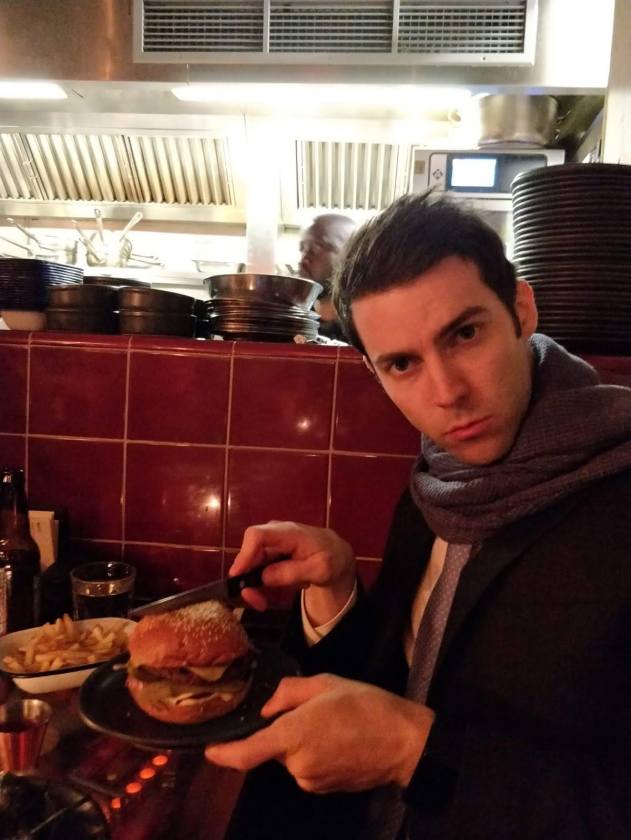 As to the sides? The cheesburger gyoza are just plain WEIRD. 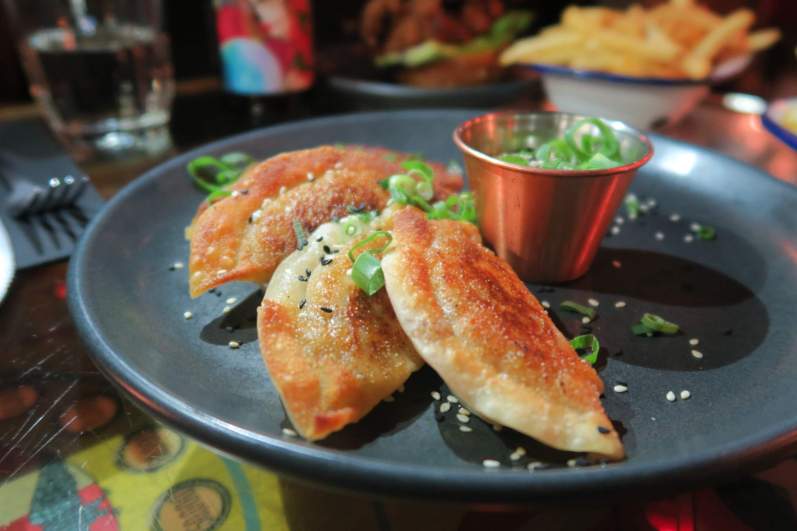 They fail as both gyoza and cheeseburgers, but as a thing in their own right? Delicious; crisp gyoza skin, a hollow centre (where the burger meat has shrunk) and a core of slightly slimey, cheesey burger meat. Dipped in the slightly vinegar heavy, ketchup-based burger sauce (topped with spring onions and sesame seeds – a nice accent), you could eat plate after plate of these. Were it not for the £8.50 price tag…

The fries are skin-on skinny fries. There’s nothing bad about them – but nothing inherently interesting either. Perfectly capable, well seasoned, well cooked fries. 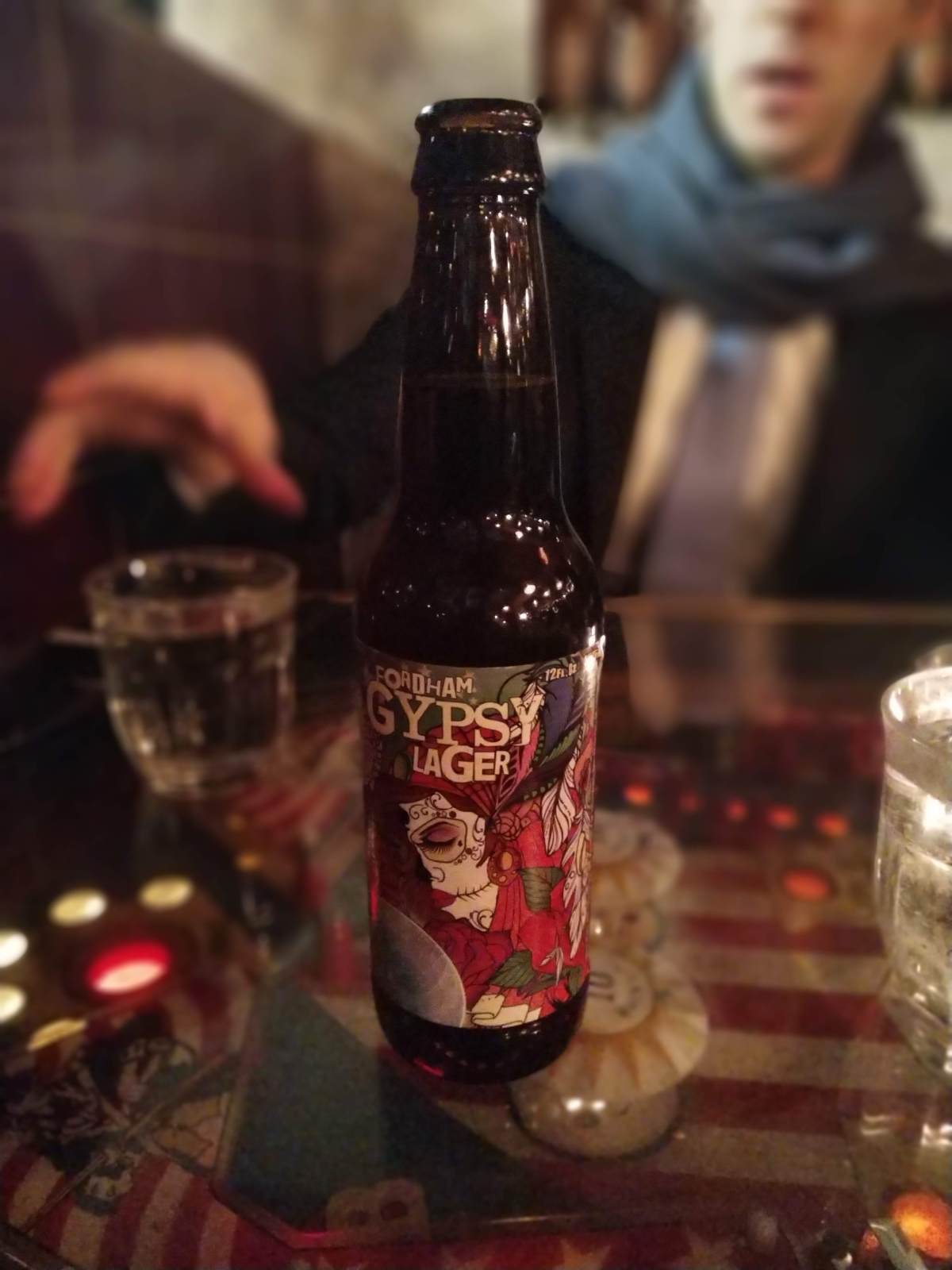 I really liked the Gypsy Lager. New world hops, a hint of hony-mead sweetness, all in all, a very smooth beer going down.

Burger rating – 3.5/5 – really completely capable, upper-mid table burger. With a few tweaks it could be top class; with the fries bundled it would even be good value… as it is, it’s a pricey novelty.

The deets
Dirty Bones started in West London, near Kensington, but has spread to Soho, Shoreditch, and Oxford. Find your nearest location here.