Hailed as home to one of the best burgers of London (in fact, winning that accolade last year from one of the various awards bodies who judge such things), the Scottish-themed steak and burger restaurant serves up a ‘Veni-Moo’ burger – a venison patty on top of a beef patty. Whilst I (surprisingly) don’t always subscribe to the notion that more meats = better (unless one of those meats is bacon, which categorically improves everything), I was curious, and we headed down for our irregular burger meet-up.

The Veni-Moo burger is topped with bearnaise, cheese and caramelised onions on a brioche bun. We added Portmahock candied bacon (all around, except for Matt, who is clearly an inferior human being). We sampled the haggis pos with ‘red jon’ for a starter, and massively over-ordered sides – fries, wilderness fries (served with pork and BBQ sauce), onion rings and even a mac & cheese turned up.

So, in chronological order.

The panko breaded haggis pops were crispy on the outside and haggisy on the inside. I’m not a Haggis fan, so whilst the crispy crunchiness was pleasant enough, the Offaly funk was not to my liking. The ‘red jon’ sauce they came with was great, though, a sweet, slightly vinegary BBQ sauce variant.

The burger, the main event. Looked great… but was ultimately underwhelming. The meats were both overcooked and under seasoned, and whilst the beef burger by itself might have held up, the venison was dryer, less flavoursome, and – on balance – completely unnecessary. The bacon – which looked amazing – could have done with a little more crispness, and still didn’t contribute enough salty crunch to make up for the lack of flavour elsewhere. The bun lacked the normal sweetness of brioche and was too chewy for the burgers (probably wouldn’t have been if the burgers had been cooked medium instead of well done, but there it was). So ultimately the overall flavour experience was, well, somewhat bland. Not bad, just not great, and certainly not living up to the hype. 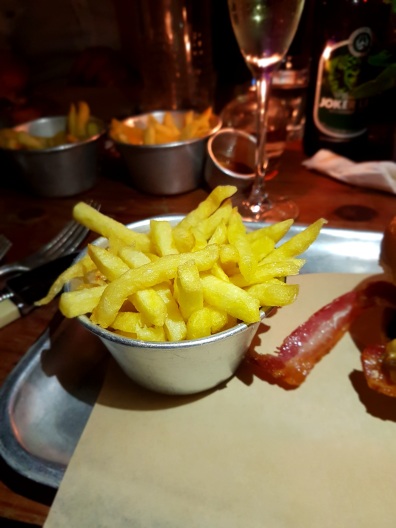 The sides were mixed bag. The fries were solid – again slightly under seasoned, but high quality potatoes, well fried, crisp on the outside and squidgy in the middle. Perfect. The onion rings, on the other hand, were some of the most deceptively mediocre onion rings I’ve had – beautifully coated and fried… but lacking any seasoning or somehow even the natural sweetness of onion, it was just like eating fried, flavourless, batter. Which is a  bit like eating crispy grease. So, yeah, not good. The wildenerness fries, however, were AMAZING. I’m not a fan of chilli fries because chilli tends to make everything soggy… but the BBQ pork here just added a sweet, chewy, porky chewiness to crispy, crunchy on the outside-squidgy-on-the-inside chips. Outstanding.

We had puddings too (sorry no pic); I had most of a sticky-toffee-pudding with ice cream which was amongst the best I’ve ever had. Nima ordered a millionaire’s shortbread ‘mess’, which was apparently great also.

Burger rating – 3/5 –  as much as I loved the sides and pudding, I’m just not in a hurry to have another one of these burgers, so can’t justify a higher rating.