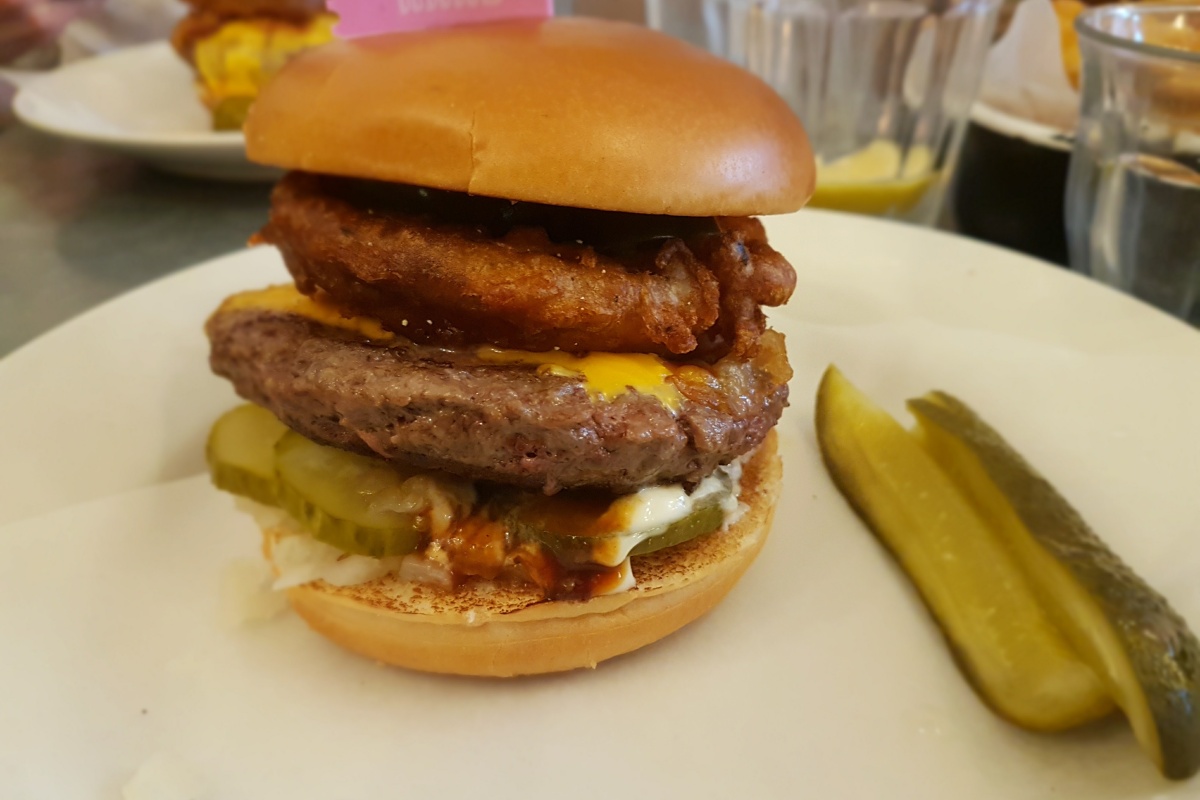 Byron started the gourmet burger revolution for me. Does it live up to my memory of it?

Byron was founded by Tom Byng, who, according to its website, spent many a night in the US eating burgers he couldn’t find in the London of 2007… and so he set up. In my mind, this man, and this chain (now owned by a private equity firm with upwards of 60 locations Nationwide) kick-started the burger renaissance London is currently undergoing and showed GBK – then the only ones with a claim to the gourmet burger – that it had no idea what it was doing.*  In my memory, their ‘pure cuts of British beef’ were always cooked to a perfect medium, delivered with super-melty cheese in a soft brioche, and were just plain delicious. They even have their own cheese for extra meltiness – Freddar, a cheddar hybrid named after one of their chefs!

*mind you, I haven’t been to a GBK in years!

We were there for a work related do, so shared a variety of starters (buffalo wings, nuggets served with BBQ sauce and nachos topped with sour cream, salsa, guac and melted cheese) and sides (fries, courgette fries). For my burger, I went for the B-Rex, medium rare (more common now than I thought it was in London!) – which is a bacon cheese burger with jalapenos, pickles, onion rings, BBQ sauce and mayonnaise. What’s there not to love?

The burger looked perfect. I mean, look at it! A perfect stack, layered up as you’d expect it. The patty looked a bit tooperfect, holding together in a slightly suspicious way and I feared it might have been overcooked…

…but look at that cross section! A perfect medium rare! Strong melt to the cheese, brioche holding up admirably against the sauces and one would assume burger juice.

Then a bite. The meat’s slightly underseasoned, or at least struggling to cope with the sweetness of BBQ sauce, onion and brioche. It’s also slightly low on the fat ratio (I’d guess an 80/20 lean/fat at best), which means it’s not as juicy as you’d hope. The grind is good, though, the texture melt-in-your-mouth perfect, the cheese glorious, the japalenos and pickles a sweet, crisp counterpoint to the crunchy onion ring. The bacon gets somewhat lost in all of this, but it’s adding salt to the hot sweet mess of this burger, so isn’t without purpose. The jalapenos are reasonably non-descript, adding the faintest hint of heat. Unfortunately… whilst all these elements are coming together well, the overall balance of this burger is a bit off – too much sweetness, not enough umami. Add to this the fact that the beef is just fine – unexceptional if good quality ground beef – and there’s no longer any specialness about this Byron burger. A serviceable output of a decent chain… but little to write home about.

As to the sides…

Drinks-wise I was having Woodford reserve off its decent bourbon list. Burgers and bourbon – a killer combination. Or you can have craft beer if you prefer…

Burger rating – 3.5/5 – it’s either gone downhill to ‘average’ or I’ve been spoiled by everything else that’s cropped up since 2007!

Everywhere in London (and some beyond), but this particular one was on the Cut, which runs from Southwark to Waterloo. Nearer the Southwark end. Find your own here.