When Oxford was identified as a destination for a “lads’ weekend” away, one of the first things I did was Google ‘the best burger in Oxford’… and up came Atomic Burger. Clearly an exercise in effective SEO as much as a in burger design and innovation, the restaurant claims “the highest quality meat”, “burgers made by hand daily”, “food cooked to order”, “secret recipes” and “local suppliers”… so we were duly sold on it. As it happens, having a drink across the road at the Big Society, the staff tried to sell us on eating a less… unconventional burger in their establishment, but at this stage we were committed.

The menu is extensive; dozens of standard and eccentric burger combinations. Most of us went for the fairly conventional and hard to argue with ‘Dead Elvis’ – crispy bacon, American cheese & fried onions listed as the key ingredients. We were reassured by the waiter that not only were the burgers cooked medium as standard but they’d happily do them medium rare for us. So far so exciting.

A side came with each burger, and we split onion rings and regular fries between us so we’d get to try it all. We also got in an order of ‘Trailer Park Fries’ which we were assured were awesome – fries topped with pulled pork, cheese sauce and barbecue sauce. Yeah, I know. Had to be done.

To start with the bun of it; the bun on this burger is poor. A slightly stale, dry-looking, powdery white bun that seems simultaneously too large and too porous to hold itself up to anything. The top half was immediately discarded as dead weight.

The patty itself; surprisingly thin, not cooked to  medium rare (a healthy medium though), a decent slice of melted-in American cheese and not quite crisp streaky bacon topped it; there was salad in but you’d have to look closely. The sides – onion rings that were breadcrumbed, but vegan (rolled in beer, flour and breadcrumbs, no egg) – were crisp and golden brown. The standard fries were reasonably thin cut from whole potatoes, partial skin on, and crisply fried. The Trailer park fries, as a separate full-sized side order, were a sight. Laden with meat and sauce, this was a side fit for a main. Drink-wise, I went for a ‘Hobo mojo’ – Bourbon, lemon & lime & maple syrup shaken over ice and served in a paper bag. 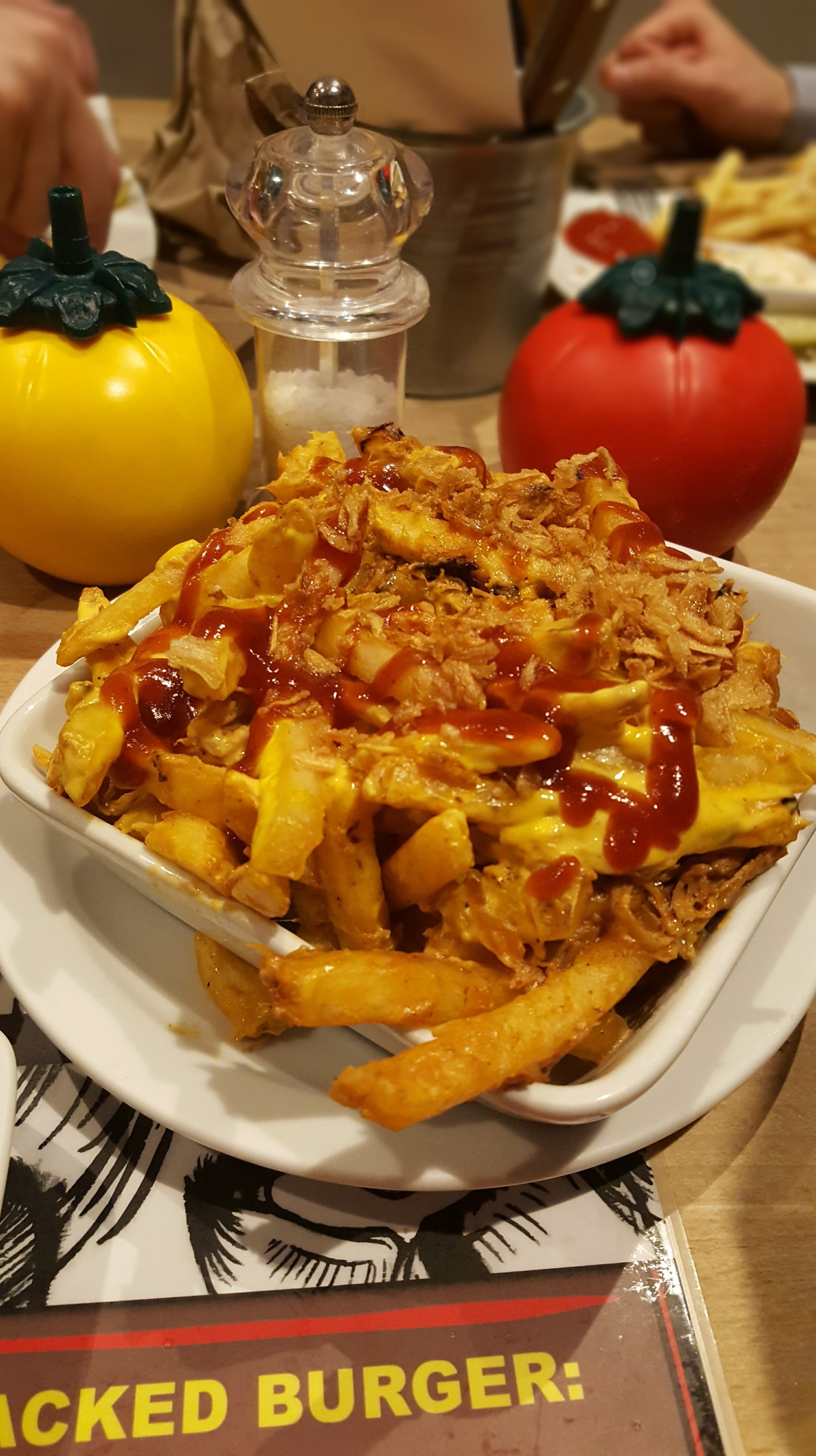 As to how everything tasted: the sides were the star of the show. The trailer park fries were incredibly moreish; the cheese sauce somehow not as chemical-tasting as you’d expect bottle-style squeezey cheddar to be; the pork moist and savoury and the sweet barbecue sauce binding it together beautifully. The chips were crisp enough not to be soggy throughout – often a challenge for this type of dish. Delicious. The standard fries were good but a pale candle to these; not quite enough starchy bite to them. The onion rings were amazing; large, sweet slices of Spanish onion rolled in flour, Peroni and possibly a panko breadcrumb, they were crisp, sweet and savoury in one, and delicious. The Cajun ones were particularly good, with a light hint of heat underpinning them. There were some other fairly non-descript sides on the plate – middle-of-the-road pickles and bottom-of-the-road oversweet, over-mayo’d coleslaw.

The main event; the burger? Well-seasoned, loosely ground meat – but the patty was too thin and the bread too big, so the flavour was somewhat lost (even with a discarded top half). The American cheese gave savoury goo to it all and again helped mask the meat flavour, and the bacon wasn’t crisp enough for crunch, so just added a sort of stretchy chewiness. The onions seemed sparse and added little sweetness. This was one of those situations where a brioche might have done some good. We had an extensive conversation with the waiter about the buns – apparently the owner knows they need changing but hasn’t got around to it yet. Best of luck to him, and hope he prioritises it soon.

And finally, the Hobo Mojo – it’s a fancy name for bourbon with 7-up and maple syrup, but it’s a HECK of a combination and I’ll be making this one at home at some point soon. Maybe minus the paper bag. Delicious.

Burger rating – 3/5 – Let down by a bun that poorly complemented the fillings, sadly, and a pale shadow of things like Dip & Flip’s equivalent burger. Next time we do Oxford, we’ll have to try a Big Society burger…

247 Cowley Road, Oxford OX4 1XG was the branch we visited, though we gather the owner has a Pizza place elsewhere in Oxford and another burger venue in Bristol. Check them out over here and make a booking for the Trailer Park fries and the Hobo mojo alone, if needs be.

Side note: the geek kitsch around the place was phenomenal; a wall full of starships, a few intriguing sculptures and lots more. It’s a fun place.