Whilst staying in New York for our Jagged Little Pill jaunt, my brother told us legend of a place that was famous both for its burgers AND its pizza. Such a thing could surely not be – a unicorn, a thing of legend, surely never to be seen in reality?

Founded in Williamsburg but growing across a few locations, this independent chain is the lovechild of entrepreneur Emma Hyland and Executive Chef Matthew Hyland. It’s primarily a pizza joint, serving Detroit-style pizzas, but the burger has received many plaudits. So we were excited!

This was definitely a sharing meal.

We had the garlic cheesey sticks (so new to the menu it’s not even online), the Caesar salad, a ‘Colony’ pizza and Le Big Matt – the $25 burger – a set of double-stack Pat Lafrieda grass fed beef patties, American cheese, greens, pickles, Sammy Sauce served with waffle fries, all wrapped in a Pretzel bun.

The colony pizza sounded exciting too – pepperoni, pickled jalapeños and honey – of all things.

On first impression, there’s a lot to like. There’s a good melt on the cheese; the burger sauce is generous and interestingly orange. The Pretzel bun looks sturdy (though possibly a little too sturdy?). The salad looks bright and fresh, the burgers seem to have a good crust. We’d been offered it cooked medium or well done and had naturally chosen medium.

Next, the cross section. 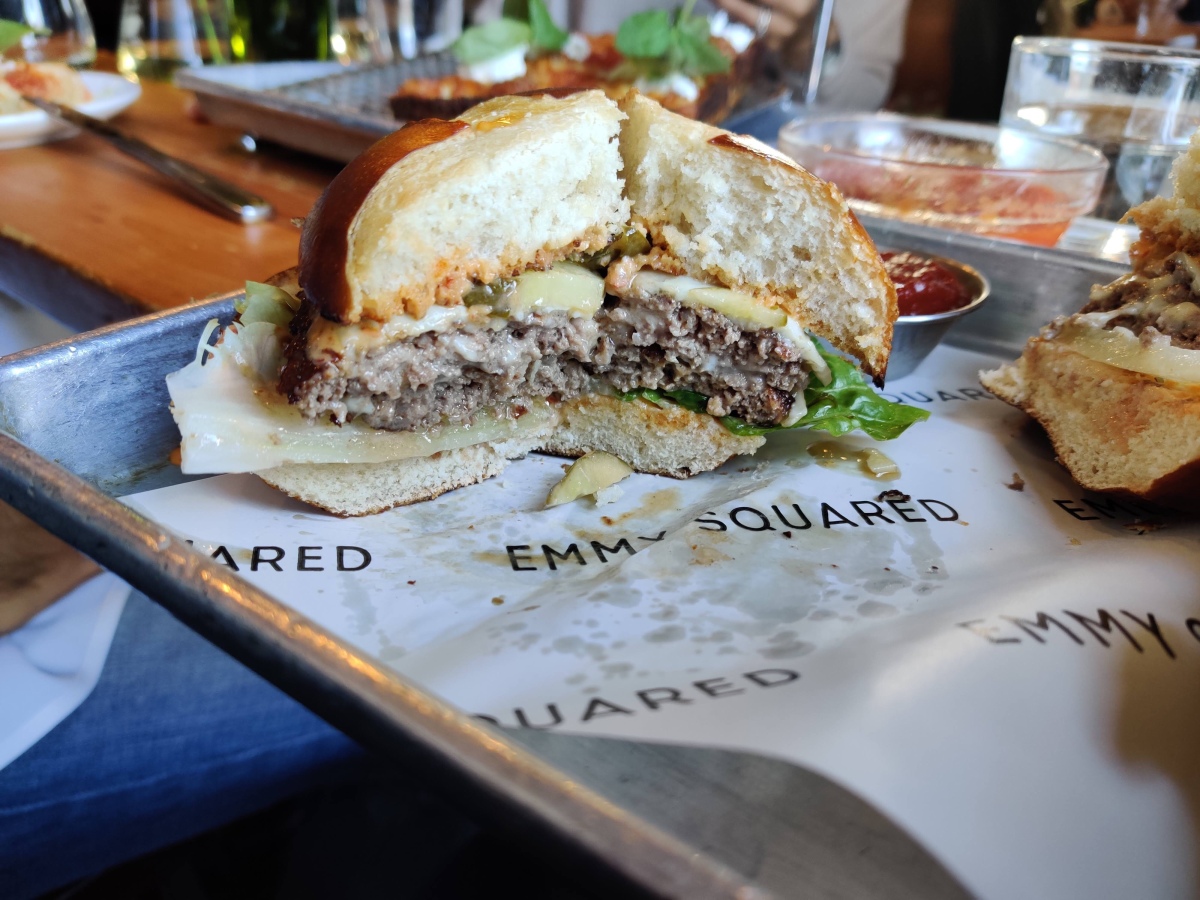 OK I was sharing this one with two siblings, so it’s not quite a cross but you get the general sense here. It’s two, 4oz patties – hefty – but not at all medium. This was overcooked. You can also note that – despite the fact its been sitting for a few minutes, despite the weight of 8oz of beef, toppings, etc., despite being cut like a Mercedes logo – the bun is barely compressed at all. It is a dense bread.

On first taste, I’m a little underwhelmed. The burger sauce is very reminiscent of the Big Mac, sweet and savoury together, but no crunch from tiny pickle, no texture to note. There’s an unexpected heat from some hidden hot peppers (perhaps that’s what greens are in Brooklyn?) – which add a lot to the flavour profile of the burger and make it interesting, The crust of the burger is a little soft, the meat is a little dry and could have used a little more seasoning. The umami is not quite where it should be. The beef is coarse ground but has been somewhat compacted in the cooking process so is a little dense; and perhaps the biggest crime for me is the large, cold pretzel bun is so firm as to feel almost stale. The burger is too dry to soften it up, and it wasn’t toasted or warmed that I could tell.

To be clear, at no point did I think of leaving my third of a burger unfinished. The meat is good, the toppings are good, the spice was interesting and the burger sauce binds it well. But a mediocre bun, overcooked meat and not quite enough seasoning let it down for me. 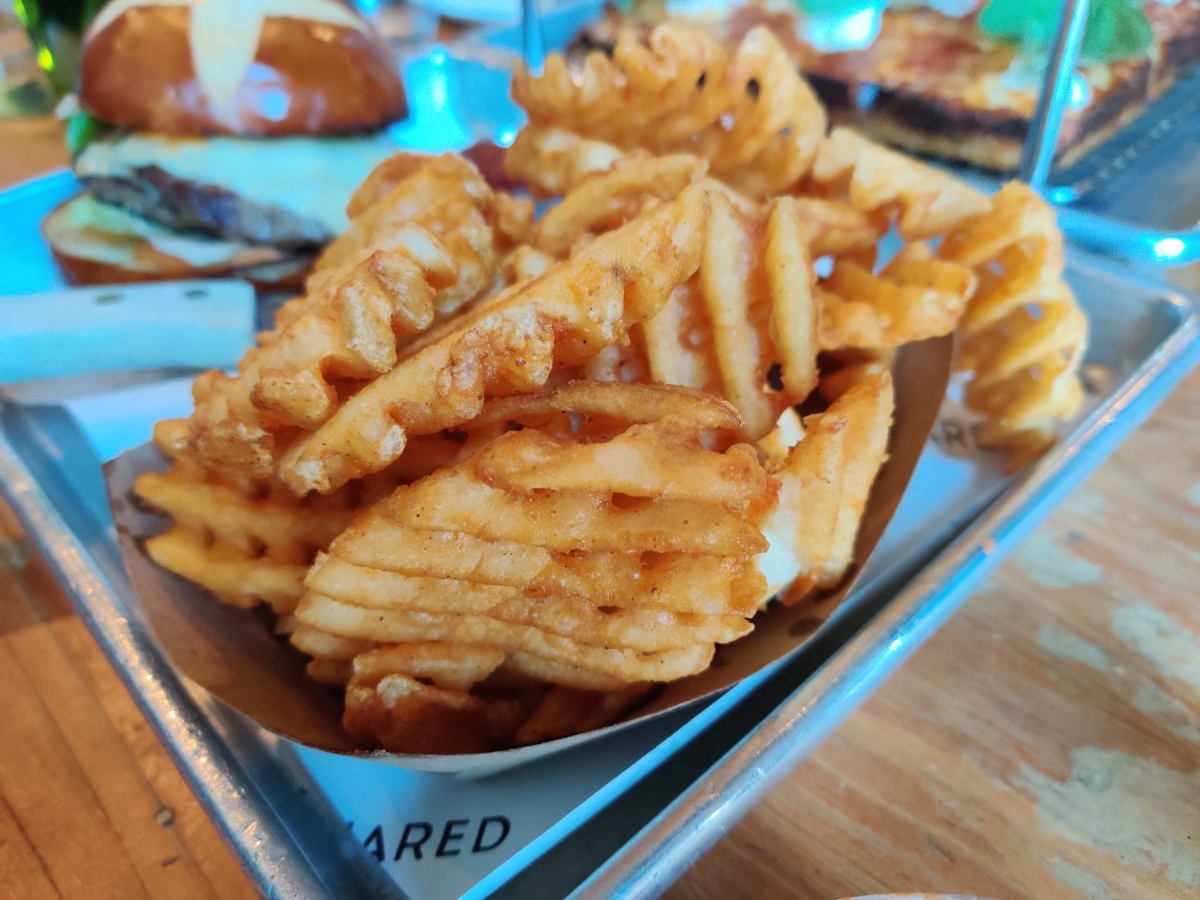 As to the waffle fries – crisp, tasty, a little underseasoned again (no salt not he table), but nice with a little marinara sauce and the home made ketchup provided. Better with a little mayo.

On to the pizza…. and I’m aware this is a burger blog but if you’ll allow a brief diversion.

It’s utterly glorious. The skirt is crisp without being burnt, bubbled and crispy with oil or butter. The pepperoni is delightfully crunchy, and the generous helping of both pepperoni and jalapeños leaves you searching for the browned, stretchy, generously spread cheese beneath.

And the taste does’t let you down. The pizza sauce is layered on thick, the cheese pulls and falls like its being filmed for an advert, the jalapeños are soft, sour and slightly spicy to contrast with the crisp crunch of the buttered crust and the perfect pepperoni. The honey tempers the umami bomb and helps the sauce cut through. It’s an utter delight. I never wanted to stop eating this. This is my new desert island pizza.

In the same category, the sides:

This delightful jenga stack of cheesey garlic bread sticks was a joy. Using the same base as the pizza, it seems, is a good call. Detroit style garlic cheese sticks served with a rich helping of garlicky, sweet and savoury marinara sauce – utterly wonderful. At $6, it’s one of the best value items on the menu and we were informed it’s been selling like hot cakes.

The Caesar salad was served with crushed croutons and a generous amount of pecorino as well as anchovies and Caesar dressing. Every bit of the crisp, fresh romaine lettuce was a a crisp unctuous pleasure, with creamy crunchiness contrasting with the sweet, sweet salad. I’ve almost never wanted to order a second salad in any context, but here… well, we had enough food, but the thought definitely occurred.

Taste – 3/5 – spicy peppers make up for the overcooked, underseasoned meat and the dry bun

Burger rating – 3/5 – whilst I probably wouldn’t order the burger again, I’d have the pizza any time. And I’m tempted to buy the cookbook for it!

There are a few locations across New York and the continental United States. Check out the website to find them in Brooklyn, the East Village, Nashville and Philadelphia.

Rare bonus pic: cross section in progress. I like to think of myself as a master craftsman instead of an annoying git in these contexts: