I can find surprisingly little on the web on the genesis of this small, seemingly independent chain of burger restaurants. I can tell you what they say about their beef: “West country beef, forerib, chuck, and a little added fat make our 180g patties. They are then smashed onto our imported chrome griddle, which is super hot, sealing in the flavour and creating a wonderful crust, so no flavour is lost on our grill. Served in a soft brioche bun with French’s mustard, ketchup, American cheese, cabbage slaw and pickles.” And, crucially, given it’s a signature feature, what they say about their gravy: “We roast a selection of carefully sourced beef bones to a rich golden brown. Then we simmer them, with organic vegetables and herbs, for a long time. This bone broth is the heart and soul of our gravy. Roasting juices from the bottom of the pan are added to the broth along with a few other little secrets (All beef related) to make our delicious gravy which we serve with almost everything for dipping.”

A little bit of web investigation reveals that “Bob Francis Double Dip Limited”, the company that has registered the dipandflip.co.uk domain name, was founded in February 2013 (as far as Companies House knows), and has one director – presumably company founder – Timothy John Lees, whose past ventures include “Lees Library Consultancy Services Ltd” of Dundee, a company which was wound up in 2014.  Oddly, I was ignored on Twitter when I asked for someone to email some questions to about the company’s history…

Regardless, nothing to see here, so let’s get to the beef.

I went for the bacon double cheeseburger, which was just greedy really. F&D’s 6oz patties are plenty for a single, so you probably don’t need more – I certainly didn’t, but that didn’t stop me finishing it.

I wasn’t keen to try the actual dip & flip specials, which feature sliced roasted lamb or beef soaked in gravy on top of a burger bun – and felt validated by the choice. Whilst I’m sure it would have been good, I wanted the textural contrast the crispy bacon promised, and didn’t feel that I needed that much gravy. Sides featured regular fries and chilli, gravy, cheese and bacon fries.

Holy moley, this was totally unexpected. The beef patties had a rich, crispy  crust, which surprisingly held a deliciously juicy, perfectly medium patty. The coarsely ground, loosely packed beef was incredibly well seasoned and topped with gooey, delicious cheese. The bacon strips were curled and crispy and packed with salty flavour. Two crisp, large but thin pickle slices, supported by the promised cabbage slaw, protected the underside of the thick, sturdy brioche bun from the intensely beefy juices which dropped out of the burger with each bite, a gift of the burger’s sensibly high fat/lean ratio (I suspect 25%:75%). On initial cross bite, I was worried the burger might be overcooked, but it was just edge factor – the middle of the burger was a perfect medium pink. The (fairly) sweet brioche provided a necessary counterpoint to the umami fest that the rest of the burger represented. Wow. Just wow.

The fries were crispy but slightly overseasoned. The chilli/gravy/bacon/cheese fries were, on the other hand, perfect. Not soggy till the very end, delicious cheese, a light kick from the chillis and a delicious crunch from the same bacon that topped the burger. 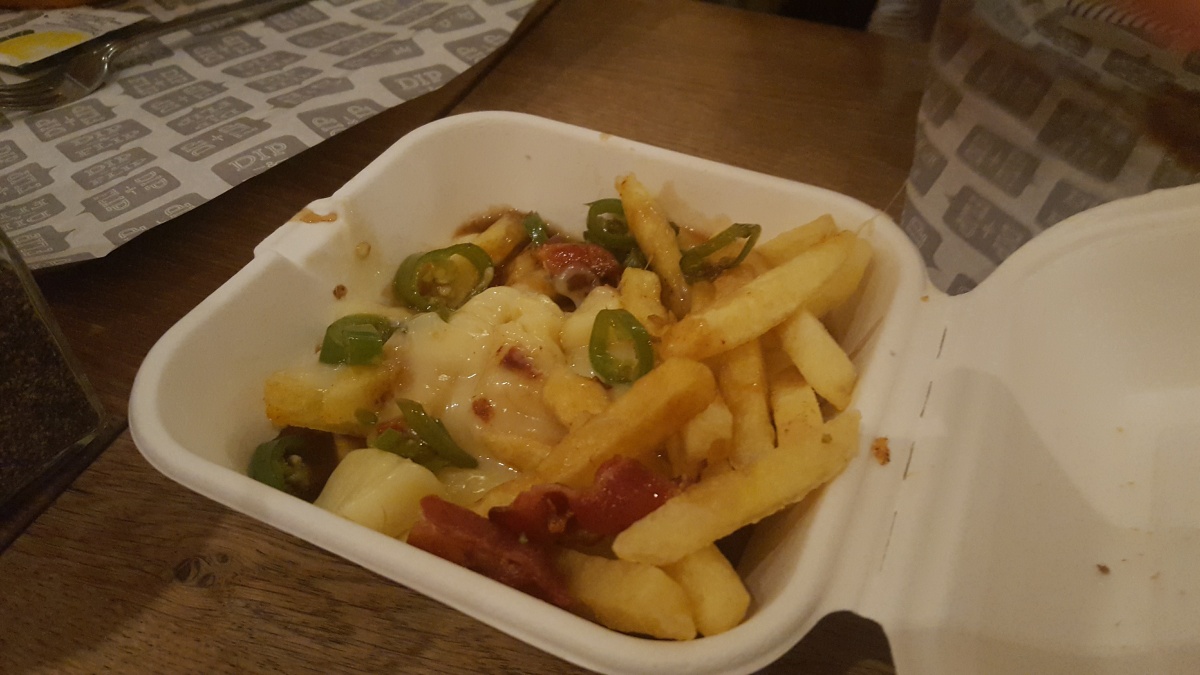 Almost everything about this meal screamed ‘outstanding’.

But wait, I hear you ask, what about the dip, the gravy? Even the normal burgers come with the gravy which is, admittedly, excellent. Just not wholly necessary; I enjoyed it more with the fries than I did when dipping the burger in it; the burger just didn’t need any further savoury-ness. If anything, something beyond the salt and sweet of meat and bun – perhaps a little more mustard, in the fry (in the style of Dirty Burger) would have sorted it.

Drinks wise, friends had a couple of hard shakes (I had a taste – outstanding) but I stuck with bourbon – a nicely bitter taste to clear the palate in and amongst huge meaty mouthfuls.

Burger rating – 5/5 – This is now in joint first place for best burger in London for me, alongside Bleecker Street and Lucky Chip (which may get a re-visit during its ‘Stranger Things’ month). Amazing.

There are a couple of Dips & flips around Southwest London, find the locations here. We ate at Battersea rise, 5 minutes walk from Clapham Junction station, by the Northcote pub. 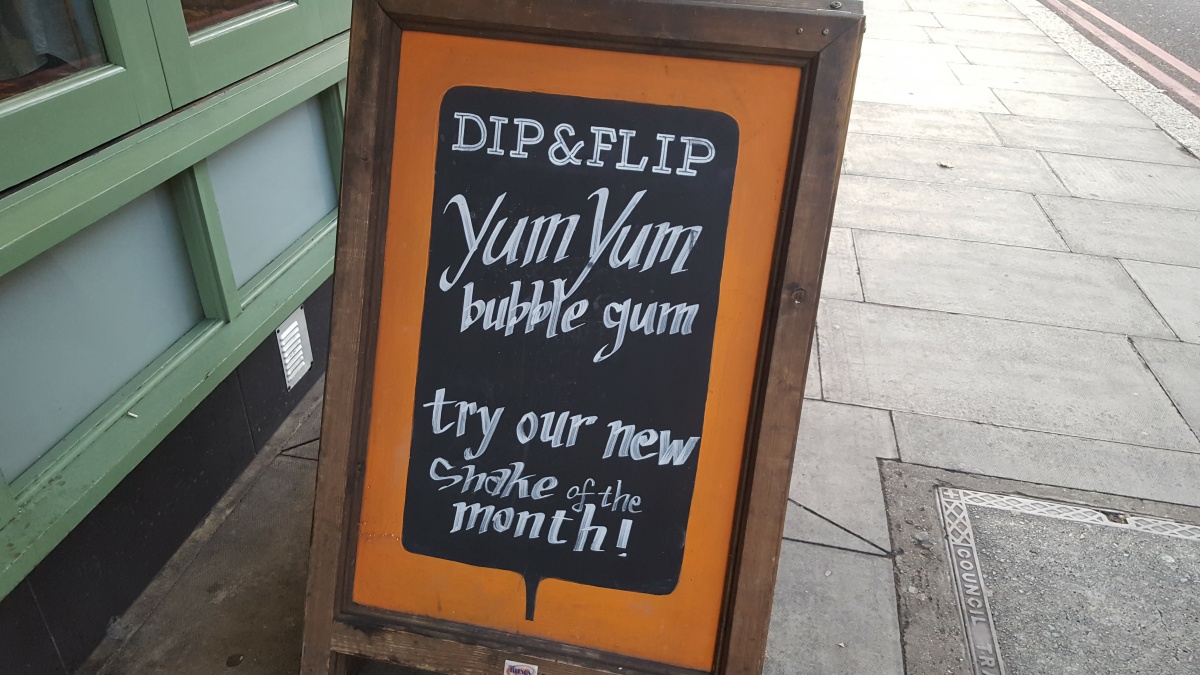